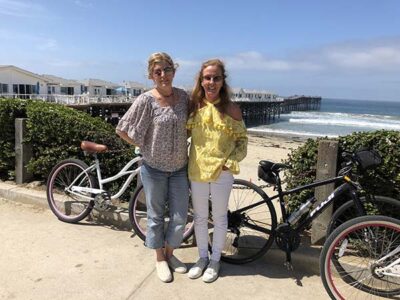 Julie and Nadine just may return and stay here!

These airy suites and cottages sit directly on the pier and feature separate living rooms and private patios/decks with beach views. Most units also add kitchenettes.

On the pier overlooking the ocean, this quaint hotel with beachy, New England-inspired cottages is 2 miles from Belmont Park and 4 miles from SeaWorld.

When it was first built in the late 1920s, the Crystal Pier in San Diego’s Pacific Beach neighborhood offered a classic amusement park setting above the water. At one point there was a Crystal ballroom built at the end of the pier, lasting only three months.

Pier hotel owner Willis Allen’s family originally acquired the pier in 1961 when his father “traded a ranch in Murrieta (Riverside County) for the pier.