I Actually Ride a Bike at Home Now!

Many Reasons to Ride a Bike! 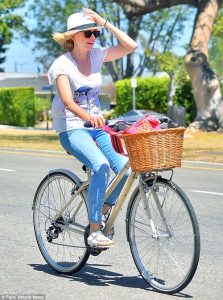 We’ve had so many riders tell us that after joining us on one of our Tours that they have now begun cycling at home; some just on a weekend with friends, some as a workout instead of going to the gym and some even riding to work a bit. There are soooo many reasons that riding is good for you. I’ll be posting a few from long-time travel journalist and rider Carlton Reid.

A five-year study of 263,450 UK commuters, published in the British Medical Journal in 2017, found regular cycling cut the risk of death from any cause by 41%, and the incidence of cancer and heart disease by 45% and 46% respectively.

Other large-scale studies have found similar. One of the biggest and best studies about the health benefits of cycling was carried out by the Copenhagen Center for Prospective Population Studies. Over some years, researchers studied 13,375 women and 17,265 men. Many died during the study period, and their ages were logged. Those who regularly cycled – say, to work – were found to live longer. Report author Lars Bo Andersen said: “The major findings of this large-scale study were that in both sexes and in all age groups … those who used the bicycle as transportation to work experienced a lower mortality rate even after adjustment for leisure time physical activity … Those who did not cycle to work experienced a 39% higher mortality rate than those who did.”

A Statistics Canada survey found that 66% of people who cycle or walk to work are “very satisfied” with their commutes. However, only 32% of car commuters say the same, and for public transit users, it’s even less, at just 25%.

Bicycles can scythe through gridlock, and ETAs can be timed almost to the second. With less destination arrival stress – in other words, more freedom, more self-determination – cyclists metaphorically whistle on their way to work.

Sort of. It’s true that the manufacture of bicycles is just as polluting as making cars, but a lot less steel, rubber, and plastics have to be used. And bicycles tend to be used for longer than automobiles.

A great deal of the particulates that poison our air is from tires, mostly automobile tires, especially from heavy braking and skidding. The smaller footprint of bicycle tires – and the lower need for stop-start braking – means that, measured in tires, an individual who cycles is less destructive of the planet than an individual who drives.

Most cars are powered by dinosaur juice. Bicycles are powered by cornflakes. (Only a tiny fraction of electric cars are solar powered, most get their energy from coal-based power stations.)