This will allow users to receive turn-by-turn directions while riding a bike. YAY!!!! 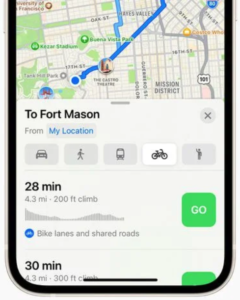 Apple Maps offers cycling directions along bike lanes, bike paths, and bike-friendly roads as much as possible, complete with details like elevation, how busy a street is, and whether there are stairs along a route. On the Apple Watch, voice guidance and haptic feedback make it easier for users to stay focused on the path ahead.

Apple is playing catch up here with Google Maps, which began rolling out cycling directions in 2010 and now offers the feature in over 30 countries. However, Google Maps is only just now beginning to roll out granular details for cycling directions, like elevation, how busy a street is, and whether there are stairs along a route.